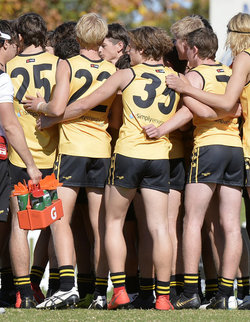 Western Australia has proven to be one of the best states for AFL draft talent with a host of current-day AFL stars hailing from the state.

The 2019 crop of West Australian talent looks to be another exciting group. In 2017, this squad won the NAB AFL U16 Championships and previous to that in 2016 they finished third in the Australian U15 Schoolboy Championships.

Below are the players to watch out for in this year’s NAB AFL U18 Championships.

JACK BULLER/CLAREMONT
In 2018, Buller made a name for himself as an undersized ruckman averaging 14 possessions, eight hit-outs, four marks and three tackles for WA at last year’s U18 Championships. In 2019, Buller has shown an ability to be a key position player at either end of the ground. In defence he reads the play exceptionally well to halt the opposition’s attacking forays, while up forward, he leads well into space to take marks and also has wonderful goal sense. In four games for Claremont’s Colts’ team, Buller is averaging 16 possessions, five marks, four hit-outs, four tackles and has kicked two goals playing as a key position utility. His best game so far in 2019 came against West Perth in round two (23 possessions, six hit-outs, four marks, four tackles and a goal).

LIAM HENRY/CLAREMONT
The Christ Church Grammar boarder is considered to be one of the most electrifying wingmen in this year’s AFL Draft pool. Comparable to Fremantle star Brad Hill, Henry is lightning quick, extremely agile, versatile, damaging forward of centre, an excellent two-way runner and boasts penetrating skills. In just three games for Claremont, Henry has already polled seven votes in the WAFL Colts Coaches Award, after averaging 22 possessions, six marks and five tackles. He produced a best afield performance against East Perth in round three (24 possessions and four goals), and was also sublime against West Perth in round two (26 possessions, five marks, five tackles and five inside 50s). He is eligible to Fremantle as a member of their Next-Generation Academy.

LUKE JACKSON/EAST FREMANTLE
The former Australian junior basketballer is one of the premier ruckmen in this year’s AFL Draft pool, considered by some AFL Recruiting Staff to be a possible first round pick. Standing at 196 centimetres, Jackson has been likened to Port Adelaide star Paddy Ryder (197cm) due to his high-leaping ability, aerobic capacity to cover the ground, his aerial prowess and reading of the play. In three games for East Fremantle, Jackson is averaging 15 possessions, 29 hit-outs, four marks, and two tackles and he has already kicked four goals. He has so far produced outstanding performances against Subiaco in round two (17 possessions, 24 hit-outs and two goals), and West Perth in round five (17 possessions, 28 hit-outs and two goals). He showcased his enormous talent at last year’s AFL U18 Championships with a dominant outing against eventual champions South Australia (25 possessions, seven marks and a goal).

TRENT RIVERS/EAST FREMANTLE
The East Fremantle Colts’ Captain is considered to be one of the best leaders in this year’s Simply Energy WAFL Colts competition. In four games for the Sharks, Rivers is averaging 27 possessions, six marks and five tackles, with notable performances against Subiaco in round 2 (29 possessions, six tackles, five marks and five inside 50s), and against Peel in round three (25 possessions, three marks and three tackles). Rivers has mostly played half-back for the Sharks, however has also demonstrated an ability to push into the midfield, where he uses his big frame to rip the ball out of stoppages and feed it to the outside runners. In 2018, Rivers finished equal-second in East Fremantle Colts’ Best & Fairest after averaging 19 possessions, six marks, and two tackles across 15 games. He also polled 10 votes in the Jack Clarke Medal with sensational performances against Perth (20 possessions & six marks), and Claremont (21 possessions & seven marks).

JEREMY SHARP/EAST FREMANTLE
The 2018 AFL U18s All-Australian is an excellent wingman/half-back flanker who can kill teams with his line-breaking capabilities. At last year’s AFL U18 Championships, Sharp averaged 18 possessions, four marks, two inside 50s and two rebounding 50s to be one of three bottom-age players to make the All-Australian team. His best performance came against Vic Metro (26 possessions, four marks, three inside 50s and a goal). He has taken his game to another level in 2019, playing for East Fremantle’s League team, averaging 14 possessions, five marks, and two tackles. He played a starring role against WAFL League reigning premiers Subiaco in round two with 14 possessions, six marks and a goal. Not unlike Collingwood gun Jack Crisp, Sharp is always composed with ball in hand, has a penetrating kick and uses his speed and evasive skills to get out of trouble.

JARVIS PINA/PEEL THUNDER
The Peel Thunder Colts captain is a small defender who has the defensive ability to shut his direct opponent out of the game but also has the awareness and skills to provide counter-attack from the defensive half. Originally from South Mandurah, Pina has drawn comparisons to Melbourne young gun Christian Salem, due to his penetrating skills, calm demeanour and excellent understanding of the game. In three games for the Thunder, Pina is averaging 22 possessions, seven tackles, and five marks, with his best game so far in 2019 came against West Perth in round one, where he finished with 32 possessions, eight marks, four tackles and two inside 50s. It is worth noting that Pina was invited for a medical just before the AFL Mid-Season Draft highlighting the regard in which he’s held by AFL Club Recruiting Staff.

DEVEN ROBERTSON/PERTH
The nephew of former West Coast captain Darren Glass, Robertson is a bullocking big-bodied inside midfielder who thrives within stoppages. A member of the WA State U18s last year, Robertson averaged 14 possessions, seven tackles, two marks and two inside 50s with his best performance coming against Vic Country (17 possessions & nine tackles). He has been compared to Melbourne’s Nathan Jones due to his ferocious attack on the ball and opposition, his desire to run two-ways and his commanding leadership style. In 2019, Robertson is averaging 30 possessions, seven marks, six tackles and three inside 50s in just two games. He was best afield against Claremont in round five, when he accumulated 37 possessions, took eight marks, laid five tackles, recorded four inside 50s and kicked a goal.

TRISTAN HOBLEY/SUBIACO
A stellar 2018 season saw Hobley attract some interest from AFL Clubs, especially after finishing second in the Jack Clarke Medal, and in Subiaco’s Best & Fairest, as well as winning selection in the WAFL Colts Team of the Year.  He claimed the Mel Whinnen Medal for being best afield in Subiaco’s Grand Final victory. Hobley has taken his game to another level in 2019, averaging 33 possessions, seven tackles, four marks and four inside 50s across three games. His best performance so far in 2019 came against East Perth in round one (30 possessions and ten tackles).  Like West Coast’s 2015 Best & Fairest winner Andrew Gaff, Hobley works tirelessly, boasts elite endurance, is a smart decision-maker with ball in hand, reads the play well, is an excellent accumulator and a precise distributor by foot.

JAKE PASINI/SWAN DISTRICTS
The Caversham junior is a no-nonsense key defender with similar traits to Adelaide’s dual All-Australian Daniel Talia. Like Talia, Pasini rarely gets beaten one-on-one such is his competitiveness, reading of the play, aerial prowess and ability to use the ball by foot out of defence. This was especially evident in the Semi-Final against Subiaco where he held the 2018 WAFL Colts Leading Goalkicker Jack Mayo goalless. He also had strong outings at last year’s AFL U18 Championships with solid defensive efforts on Sam Flanders (Vic Country) and Matthew Walker (Allies). In four games for Swan Districts, Pasini is averaging 18 possessions, and four marks, with his best performance coming against Subiaco in round five (22 possessions and five marks).

JAXON PRIOR/WEST PERTH
The Sorrento-Duncraig product is one of the best medium-sized defensive prospects in this year’s AFL Draft pool. Likened to Fremantle’s rising star Luke Ryan, Prior reads the play exceptionally well often intercepting the opposition’s attacking forays. He also boasts elite vision, damaging skills and is a smart decision-maker, making him an offensive weapon from the half-back line. In four games for West Perth, Prior is averaging 26 possessions, seven marks, three tackles, two inside 50s and he has already kicked two goals. He is currently equal-leading the WAFL Colts Coaches Award with 14 votes, with best afield performances against Claremont in round two (34 possessions and eight marks) and South Fremantle in round three (28 possessions, four marks, four inside 50s and two goals).