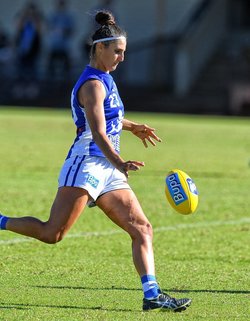 THERE is a game each on Saturday afternoon and Sunday morning in the WAFL Women's 2019 Optus Premiership Season with Claremont, East Fremantle and Subiaco looking to consolidate a top two spot, and Peel Thunder hunting their first win.

It has been a fascinating opening four rounds of the inaugural WAFLW season and that has seen the top four teams East Fremantle, Subiaco, Swan Districts and Claremont all win two games apiece across the opening month.

Peel Thunder might not have won a game yet but they have been competitive as well meaning there has been little separating the five teams in the competition which was a big reason why the league was started with the five teams to create for a tremendously competitive season.

Now Round 5 of the WAFLW season will get underway on Saturday afternoon at Claremont Oval with Claremont taking on East Fremantle.

The game gets underway at 3.45pm and will be available to be watched on livestream from the WAFL website and Facebook page.

The other game of Round 5 in the WAFLW will take place on Sunday morning from 9.15 with Peel Thunder hosting Subiaco at Mandurah's David Grays Arena.

Swan Districts is the only team to have played in each of the opening four rounds and they have the bye in Round 5 after two wins and two losses.