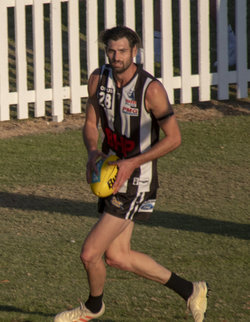 PERTH and Subiaco continued their winning starts to the 2019 season on Saturday ahead of this Sunday's WAFL State Game while South Fremantle and Peel Thunder won big, and West Perth opened its account at the expense of East Fremantle.

Round 5 of the 2019 WAFL season all took place on Saturday afternoon with it being the last chance for the players to press their case for selection in this Sunday's WAFL State Game against the SANFL at Optus Stadium.

That produced plenty of outstanding individual performances across the five games while there were some fascinating results at the same time.

Things got underway at Fremantle Community Bank Oval with South Fremantle keeping its impressive form going with a 20.11 (131) to 9.18 (72) victory against the West Coast Eagles.

The round then came to an end at Bassendean's Steel Blue Oval with Subiaco coming from behind at three quarter-time to beat Swan Districts 11.13 (79) to 9.7 (61).

Following five rounds of the 2019 WAFL season, Subiaco and Perth both hold perfect 5-0 records while South Fremantle is just behind at 4-1.

PLAYER OF THE ROUND – TONY NOTTE
The 29-year-old looks a guarantee to represent the WAFL once again as part of his outstanding and consistent career at Swan Districts that is showing no signs of slowing down.

He has started the 2019 season with the Black Ducks in as good form as ever coming off another fairest and best winning campaign in 2018.

The co-captain remains a rock solid part of the Swan Districts back-line and whether it's intercepting opposition attacks or setting up play going the other way, he remains tremendously effective while always having the ability to go forward or into the ruck if need be.

With 224 games under his belt now for Swan Districts including a remarkable 149 in-a-row having not missed a match since sitting out the last three of 2011 through injury, his legacy only continues to grow.

Already a dual fairest and best winner, regular state representative and life member, he continues to be in outstanding form and he's not even 30 years of age yet.

He was tremendous once again for the Black Ducks at centre half-back in Saturday's strong showing against the undefeated Subiaco. Finished the afternoon 20 possessions, seven marks, three tackles and three free kicks going his way.

It now appears it would be only himself stopping him from representing the WAFL for a seventh time this Sunday against the SANFL at Optus Stadium. 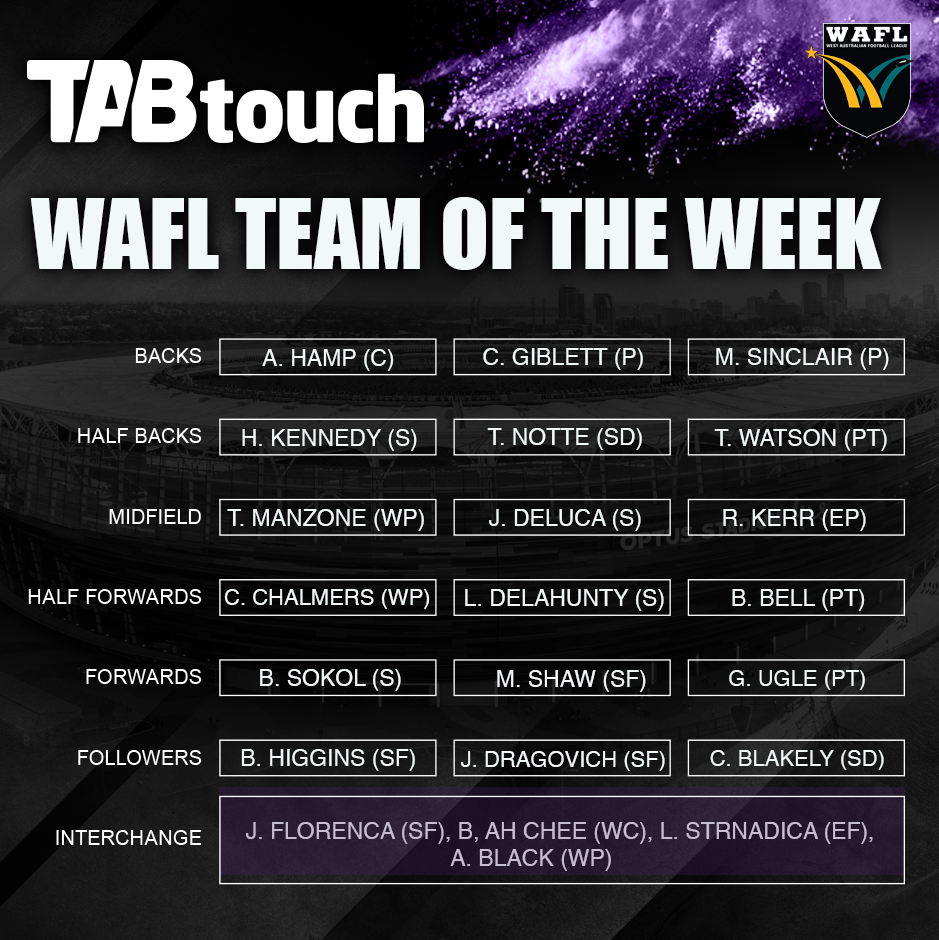 BACK POCKET – ANTON HAMP (Claremont)
Claremont might have lost its second consecutive game at the hands of Perth on Saturday but that was through no fault of his own as the 133-game veteran continues to be a standout key defender for the Tigers. Kept Perth big man Sam Garstone to two kicks and a goal while having 13 disposals, four marks and three tackles himself.

FULL-BACK – CLAYTON GIBLETT (Perth)
He is one of the unheralded members of the Perth back-line that is proving one of the great strengths of their team that has now been a stable unit for some time. Has settled nicely at the Demons after crossing from the Royals craving opportunity and is now a quality key defender and played a big role in the Demons holding Claremont's Tom Lee to one goal on Saturday while he had 13 touches and five marks himself.

BACK POCKET – MICHAEL SINCLAIR (Perth)
Has been the standout intercept and rebound defender for some time now, and perhaps only recently has he started to receive the recognition he deserves. Is now a 100-game player and looks set to play for the WAFL against the SANFL on Sunday. Was terrific in Saturday's win against Claremont with 25 possessions and eight marks.

HALF-BACK FLANK – HAYDEN KENNEDY (Subiaco)
The dual premiership winning small defender has opened the season in just about career-best form as part of a Subiaco defence that continues to be tough to score against and to set up their team's attacks well. He had another 26 possessions, eight marks and four tackles in the come-from-behind win against Swan Districts.

HALF-BACK FLANK – TOBE WATSON (Peel Thunder)
The first-year rookie at Fremantle cemented himself as a regular league player last year with Swan Districts and now has continued on that momentum with Peel this season. Has settled into a role in the Thunder back-line impressively and was a big part in Saturday's win over East Perth finishing with 18 possessions and seven marks.

WING – TRENT MANZONE (West Perth)
West Perth scored its first win of the season at the expense of East Fremantle on Saturday and he was instrumental in the result delivering one of the best performances of his 109-game career with the Falcons. Finished the afternoon with 37 possessions, eight inside 50s and six marks as he celebrated the first win of his WAFL career without Bill Monaghan as his coach.

CENTRE – JOSH DELUCA (Subiaco)
He has already won four premierships in a career that has only spanned 79 WAFL games to date. He deserves to consider himself unlucky not to be plying his trade in the AFL but that's to the benefit of Subiaco and he produced another 32 disposals, eight marks, six tackles, six inside 50s and a goal in Saturday's win against Swan Districts.

WING – ROHAN KERR (East Perth)
He starred in West Perth's premiership triumph of 2013 and remained one of the elite players in the competition until work commitments saw him leave the league at the end of 2016. But two years out hasn’t diminished his abilities and he's returned right where he left off in 2019 at East Perth, including producing 34 possessions and 11 marks despite a heavy loss in Mandurah against Peel.

HALF-FORWARD FLANK – COREY CHALMERS (West Perth)
Another West Perth player instrumental in the Falcons breaking through for their first win of the season against East Fremantle on Saturday. Split his time between playing in the midfield and in the forward-line, and ended the afternoon with two goals to go with 23 disposals, seven marks and four tackles.

CENTRE HALF-FORWARD – LACHLAN DELAHUNTY (Subiaco)
The versatile big man continues to be one of Subiaco's great weapons and an unstoppable force for the opposition. Was tremendous again as Subiaco kicked the only five goals of the last quarter to beat Swan Districts, ending the afternoon with 26 possessions, 17 hit outs, nine marks, three tackles and two inside-50 entries.

HALF-FORWARD FLANK – BLAIR BELL (Peel Thunder)
The burly dual premiership-winning Peel forward missed the first two games of the season but has been tremendous now in his three matches to put himself in the mix to play for the WAFL against the SANFL in Sunday's State Game. Kicked another three goals from 10 possessions and six marks in Saturday's thumping win over East Perth.

FORWARD POCKET – BEN SOKOL (Subiaco)
Has turned himself from a crafty half-forward to Subiaco's main spearhead in attack and is thriving on that responsibility, and is proving tough to match up on with his ability to play tall and small. Kicked another three goals for the Lions against Swan Districts from 20 possessions and 11 marks.

FULL-FORWARD – MASON SHAW (South Fremantle)
Was a dominant presence in attack for the Bulldogs in Saturday's 59-point win over the West Coast Eagles and that was all the more impressive considering he was in doubt during the week after copping a knock the week before when he kicked four goals against East Fremantle. But kicked six goals against the Eagles with 14 disposals and six marks.

FORWARD POCKET – GERALD UGLE (Peel Thunder)
The dual premiership-winning captain at Peel might not be winning a lot of the ball to start 2019, but he is proving tremendously effective when he has it in his hands and is applying good forward pressure. Ended up kicking three goals from 15 possessions in the win against East Perth on Saturday on home soil.

RUCK – BROCK HIGGINS (South Fremantle)
Has cemented himself as the standout ruckman in the competition to start the 2019 season and for the fifth straight week, takes that position in the Team of the Round. The workload he is carrying at South Fremantle and what he puts his body through meant he needed a rest from playing in the State Game, but it was another commanding performance against West Coast and Keegan Brooksby with 21 possessions, 29 hit outs and four inside-50 entries.

RUCK ROVER – JACOB DRAGOVICH (South Fremantle)
Looks a lock to make his State Game debut this Sunday based on his run of career-best form to open the new season with South Fremantle. Increased opportunities have opened up in the midfield following the string of retirements at the end of 2018, and he's grabbed those with both hands. Had another 28 possessions, 12 tackles, seven marks and four inside-50 entries on Saturday.

ROVER – CONNOR BLAKELY (Peel Thunder)
Can't do much more to bang the door down to earn a position back in the Fremantle AFL team with a best on ground display for Peel against East Perth in Mandurah on Saturday. Finished the afternoon with 31 possessions, eight marks, three tackles, three inside 50s and a goal.

INTERCHANGE – JAKE FLORENCA (South Fremantle)
Another player fully grabbing his increased opportunities in 2019 at South Fremantle and is taking full advantage by delivering some outstanding performances in the midfield. Racked up another 27 possessions, seven tackles and a goal in Saturday's big win over the Eagles.

INTERCHANGE – BRENDON AH CHEE (West Coast)
He might have been part of an Eagles team that lost to South Fremantle by 10 goals, but he put in a hard-working performance mostly on the wing to continue to keep his hand up for selection with West Coast's AFL team. Took a spectacular mark also out on the outer wing to go with 32 possessions, four tackles and four inside-50 entries.

INTERCHANGE – LUKE STRNADICA (East Fremantle)
The former Fremantle-listed big man has made a good start to his return to his original WAFL club despite East Fremantle remaining winless after the opening five rounds of 2019. Has spent more time in the ruck with captain Jonathon Griffin out injured but the possibility of his partnership up forward with Cameron Loersch remains exciting. Kicked two goals against West Perth with 15 possessions, 50 hit outs, four tackles and four inside-50 entries.

INTERCHANGE – AARON BLACK (West Perth)
The inspirational West Perth skipper has continued his consistently strong form this season despite the winless start to the season on Saturday, but  he was instrumental in the breakthrough win against East Fremantle. Ended the game with 32 possessions, eight marks and eight tackles.

UNLUCKY BUNCH
There were plenty of players who delivered tremendous performances across Round 5 but couldn’t quite fit into the Team of the Round, including: