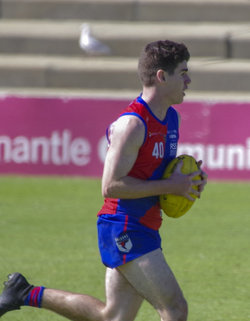 SWAN Districts continued its impressive and unbeaten start to the WAFL Colts season with a win over the reigning premier Subiaco on Sunday while Peel Thunder also kept its perfect record intact with wins as well for Perth and West Perth.

Coming off reaching the Grand Final in the Colts last year, Swan Districts has continued that momentum to start the 2019 season.

They made it five consecutive wins when they proved too good for Subiaco on Saturday with Peel Thunder joining them in remaining undefeated but the wins for West Perth and Perth ensured they have made good starts in the Colts for 2019 as well.

West Perth was the only visiting team to win on the morning beating East Fremantle 9.11 (65) to 9.6 (60) at East Fremantle's New Choice Homes Park.

The round then concluded with a Grand Final rematch at Bassendean's Steel Blue Oval with Swan Districts defeating Subiaco 14.10 (94) to 7.9 (51).

Following the opening five rounds of the season, Swan Districts is out on top of the ladder with a perfect 5-0 record ahead of Peel Thunder (4-0).

Perth's colts won its second game of the 2019 season starting strongly and continuing on the rest of the way for a 32-point over Claremont at Mineral Resources Park.

The Demons had won just one of their opening three matches coming into the contest on Saturday morning as had the Tigers so both teams were trying to build some early season momentum.

Perth came out and started impressively kicking the only three goals of the first quarter to set the tone for the rest of the contest.

The Demons kicked another three goals to two in the second term to head into half-time leading by 20 points.

Claremont then had plenty of chances on goal in the third quarter but kicked just 1.6 while the Demons kicked two goals straight to still lead by 20 points at three quarter-time.

Owen McClelland kicked two goals for Perth as did Elijah Taylor to go with 25 possessions, four marks and four inside-50 entries.

Deven Robertson produced a best on ground performance for the Demons made up of 37 disposals, eight marks, five tackles, four inside 50s and a goal.

Kade Lines kicked two goals for Claremont from 15 disposals and six entries inside the forward 50.

Peel Thunder continued its impressive start to the 2019 colts season remaining undefeated with a 37-point victory on Saturday morning against East Perth at David Grays Arena.

Peel had opened its season with wins against West Perth, East Fremantle and Subiaco on the back of reaching last year's preliminary final heading into Saturday's clash with an East Perth team who had won one of their opening three matches.

The Thunder got off to a fast start to continue on their momentum kicking four goals to one in the opening quarter against the Royals.

Peel then held East Perth to just the one point in the second quarter while kicking 1.5 themselves and that was enough to see the Thunder's lead grow to 25 points by the major break.

Peel kicked further away in the third quarter with another four goals to one and then then despite East Perth kicking the only two goals of the final term, the Thunder still won comfortably 9.13 (67) to 4.6 (30).

East Fremantle and West Perth appeared to meet in the closest colts battle of the round with both teams coming into Saturday morning's clash at New Choice Homes Park with two wins from the opening four rounds.

That set the stage for what loomed to be a terrific contest and it didn’t disappoint.

East Fremantle started strongly on home turf kicking four goals to two in the opening quarter with the Sharks still managing to hold a 12-point lead with both teams managing the one goal apiece in the second term.

West Perth closed the gap in the third quarter kicking three goals to two to leave East Fremantle only leading by four points heading into the last term.

Ewan Brazier kicked two goals for West Perth as did Cooper Blackburn to go with 17 possessions.

Tyron Hindmarsh had a big game for the Falcons with 28 disposals, 11 tackles and seven marks while Jaxon Prior picked up 23 touches, Heath Chapman 21, Ben Johnson 20, Callum Johnson 18, Koopah Todd 17 and Cooper Blackburn 17.

It was a Grand Final rematch at Steel Blue Oval on Saturday morning and Swan Districts continued its undefeated start to the new season with a 43-point victory against Subiaco.

Swans came into the game having opened the new season with wins against South Fremantle, East Perth, Perth and West Perth while the Lions have had significant player turnover since last year's premiership and lost their first three games of 2019.

While Swans were undefeated and the Lions winless coming into the contest, it was Subiaco who started the better with the only goal of the first quarter.

Subiaco then kicked three goals to one in the second quarter to head into half-time in control of the contest leading by 22 points to appear on track for their first win of the season.

Whatever Swan Districts coach Simon Bergin said to his group at half-time worked a treat with Swans coming out and holding Subiaco scoreless in the third quarter while piling on six goals themselves to take a 16-point lead into three quarter-time.

The Black Ducks continued that momentum in the last term as well kicking another seven goals to one to end up winning 14.10 (94) to 7.9 (51) on the back of 13 goals to three after half-time.

Riley Garcia showed that he's benefited from his taste of league football already in 2019 by returning the colts for Swans and collecting 26 possessions.

Nick Martin kicked three goals for Subiaco to go with an outstanding performance with 24 possessions, nine marks and four entries inside the forward 50.

Tristan Hobley had a big day out too for the Lions racking up 39 possessions with Ben Golding collecting 31 disposals, Jacob Peletier 19, Noah Ash 17 and Jackson Martino 17.