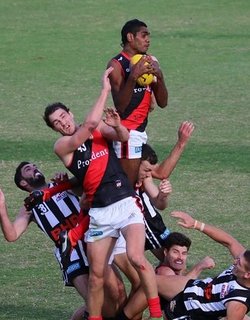 In-form Perth Demons pair Michael Bennell and Michael Sinclair have been added to the Kia WAFL State Squad ahead of this Sunday’s clash with the SANFL at Optus Stadium.

Bennell has been rewarded for his early season form, finishing with four goals over the weekend against the Tigers, moving his tally to 14 for the season.

The 25-year-old excitement machine is joined by Sinclair, with the defender shaking off injury concerns this week to gather 25 disposals in Perth’s 14-point win.

A win for WA would see the team claim its seventh-consecutive victory in State Games and set a new record, surpassing WA’s six game winning streak in State Games that concluded in 1927.

As this game forms part of an AFL match day, an AFL ticket is required for spectators to enter the ground. All spectators who purchase a ticket can attend both the State and AFL game.

If you are a WAFL club member, contact your club for special offers and promotions for the fantastic event.