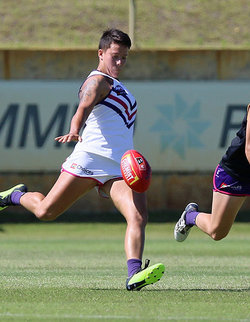 EVIE Gooch is fresh off a standout first AFL Women's season with the Fremantle Dockers and now she can't wait to be part of the era with the Optus WAFL Women's competition with East Fremantle.

Having spent most of her sporting life up until recently playing soccer, the growth of female football inspired Gooch to give things a try at East Fremantle three years ago and she has never looked back.

As part of the East Fremantle WAWFL premiership team in 2018, Gooch went on to join the Fremantle Dockers in the 2019 AFLW season.

She would find a permanent position in defence and ended up having a tremendous season as part of the Dockers team that made a tremendous run into the finals before just falling short in the preliminary final against Carlton at Visy Park.

But Gooch had cemented herself as a quality player in AFLW and now couldn’t be more excited to be part of the new WAFLW competition that for the Sharks begins this Sunday against Peel Thunder at East Fremantle's New Choice Homes Park.

Gooch is feeling that excitement and while there's a degree of nervousness, she can't wait to get things underway on Sunday.

"Everyone is stoked I think with the new structure of this season with the new competition and there are some big things to look forward to," Gooch told 91.3 SportFM.

"There's obviously a few nerves there before the first game and Peel have always been a really good competition against us over the years. We are looking forward to the game and hopefully the girls have a great weekend and get things off to the perfect start."

With the top players from the WAWFL competition now condensed into the five clubs for the inaugural WAFLW season, Gooch is expecting fierce competition from all five teams.

While as reigning WAWFL premiers, she hopes East Fremantle will again be strong in 2019, she is fully aware that Swans, the Tigers, Lions and Thunder are all going in with high expectations as well.

"It's so hard to tell now which teams will be strong with the talent moving into the five clubs rather than the eight teams from last season. Every team looks really strong at this point so we'll just have to wait and see how it plays it out to see who the standouts are," she said.

"Even looking at this pre-season, we had to make a few cuts which is something that never used to happen with women's footy.

"Having a huge squad of about 60 girls is something that's really great to see and it's only going to keep growing especially with the Youth Girls coming through to play senior footy now as well."

As for her journey now into being an AFLW and WAFLW player and a star in her own right having found her feet as a defender, Gooch is proud of the way the growth in female football has happened for it now to be attractive as opposed to other sports.

"I played Auskick a tiny bit when I was growing up but there were no girls teams to be involved with," Gooch said.

"So basically I started playing at East Freo just two years ago. I've got two seasons under my belt and I'm loving it so far."

Looking back on the 2019 AFLW season with the Dockers, Gooch couldn’t have enjoyed the experience any more to make it all the way to the preliminary final after Fremantle had a challenging first two seasons in the new competition.

"It was just a huge turnaround for the girls. There were some changes at the club which ended up going really smoothly and everyone really just enjoyed themselves," she said.

"Obviously the prelim didn’t go the way we wanted it to but we had a great season to go by still anyway. Everyone is feeling really good about the season we were able to have."

Now that the Dockers players have tasted what success can be like in AFLW, Gooch has no doubt that all the players will come back even more desperate in 2020 to continue where they left off and even try to go a step or two better.

"Seeing how much success we had with what we did do during the season, the girls are just really pumped to get going and can't wait to get back into it," she said.

"Obviously we've now all got our WAFL teams to focus on but we've had a meeting as the leadership group last weekend and everyone is already really excited about next season.

"Obviously there's a lot to work on in between with WAFL, but I think we can keep going with what we were doing at Freo. There's not much we need to change to have another really good season."

"He is one of the best coaches I've ever had," Gooch said.

"He's gotten a really good rapport with the girls already and his professional is great, but then also so is the enjoyment that he brings to the team. Being able to give us that combination is what makes him standout.