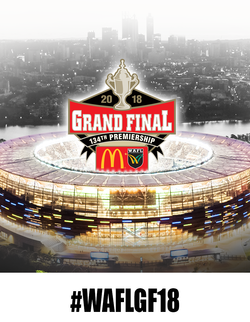 Purchase your tickets to the 2018 McDonald’s WAFL Grand Final this Thursday.

The League season-decider will be played at 2.40pm on Sunday, September 23 featuring the first ever public kick-to-kick on the ground for fans.

The Reserves and Colts Grand Finals will be played at the venue prior to the League clash.

Adults tickets start from $20 and concession and members are only $15. Children under 16 years are free with an adult ticket pre-purchased through Ticketmaster.

Fans are encouraged to pre-purchase tickets to the WAFL Grand Final as free public transport is included in the ticket price.

*proof of membership to be shown upon entry