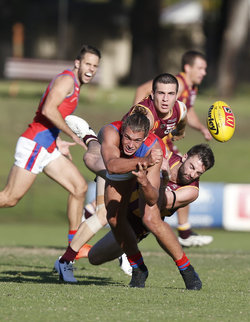 ROUND 19 is the third last weekend of the 2018 WAFL home and away season with Perth and Claremont meeting in a battle that could very well determine which plays finals while East Perth and Swan Districts have to win too to keep themselves in the hunt.

With just three rounds of the home and away season remaining and eight teams still in finals contention, every game now takes on greater significance and all four matches on Saturday will have finals ramifications.

Each of the four matches all take place on Saturday afternoon in the traditional 2.15pm time slot as well with the reigning premiers of the last two years Peel Thunder having the bye and hoping to cling on to fifth position depending on how the results go.

The game with the biggest finals implications takes place at Lathlain Park with Perth returning from the bye to host Claremont.

The Demons currently hold fourth position with a 7-8 record but finish the season against South Fremantle and Subiaco heightening the importance of a win on Saturday if they hope to end their finals drought that dates back to 1997.

The Tigers are in seventh spot at 6-9 but a win on Saturday will have them potentially as high as fourth position with games to then finish against Peel Thunder and Swan Districts.

Swans have now lost seven of their past eight matches and with a bye to come next weekend, the only way they can still play finals appears to be to win their remaining games. That needs to start against South Fremantle on Saturday and then against Claremont in the final round.

South Fremantle returned to the winners' list last Saturday beating West Perth by five points coming off the bye and losses to Subiaco and Peel. That puts the Bulldogs in a strong position to secure second position should they win their last three games against Swan Districts, Perth and East Fremantle.

West Perth has its third crack at the undefeated Subiaco for the season when the Falcons host the Lions at Joondalup Arena.

The first two games have been competitive affairs with Subiaco only beating West Perth by 22 points in Round 6 and 33 points in Round 13. Now the Falcons will look to try and become the first team to beat the Lions for 2018 and if they do, they have a chance of staying in second position.

East Perth has a must-win match against East Fremantle at Leederville Oval with the Royals likely to fall out of finals contention unless they can beat the bottom placed Sharks.