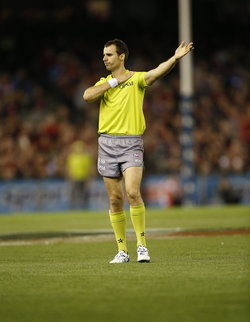 West Australian based AFL field umpire Jeff Dalgleish will join an elite group of umpires when he officiates his 300th senior football match this weekend.

Dalgleish began umpiring in 1999 in the East Fremantle juniors and the WA Amateur League. He progressed to professional football, making his WAFL umpiring debut in 2003 and his AFL debut in 2009.

The highlight of his career was officiating the 2015 AFL Grand Final alongside WA’s Brett Rosebury.

Dalgleish has recently joined the WA State Umpiring Advisory Group (SUAG) to provide measured and detailed thoughts on the future of WA umpiring.

“On behalf of the entire West Australian umpiring community, I would like to congratulate Jeff on reaching 300 games of senior football,” he said.

“It’s an outstanding achievement at any level of sport.

“Jeff is a hugely respected member of the umpiring family in WA. Despite the rigours of umpiring at the elite level, Jeff continues to give back to grass roots football playing a key role with our inaugural State Umpiring Advisory Group.

“Quality role models are integral to attracting and retaining the next generation of umpires and Jeff sits at the top of the list in this regard.”