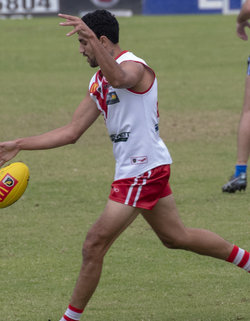 IT was a fascinating WA Day long weekend of WAFL action in Round 9 with a host of players putting their hands up for the TABtouch Team of the Round in wins for Peel Thunder, Swan Districts, West Perth and South Fremantle.

The WA Day round began on Saturday afternoon with Peel Thunder returning to the winner's list defeating Claremont 10.5 (65) to 7.12 (54) at Claremont Oval boosted by the inclusions of the likes of Brandon Matera, Danyle Pearce and Hayden Ballantyne.

It was then time for the two traditional WA Day derbies starting at Joondalup Arena with Tyler Keitel kicking six goals as West Perth beat East Perth 13.15 (93) to 10.9 (69).

The weekend concluded at Fremantle Community Bank Oval in the WA Day Foundation Derby with South Fremantle making it six straight against East Fremantle, winning 18.13 (121) to 7.6 (48).

Despite the bye in Round 9, Subiaco (7-0) remains clear on top of the WAFL ladder ahead of South Fremantle (6-2).

West Perth (5-3) and Swan Districts (5-3) are locked in a fight over third position with East Perth (4-4) clinging to fifth spot despite losing three straight heading into the Round 10 bye. 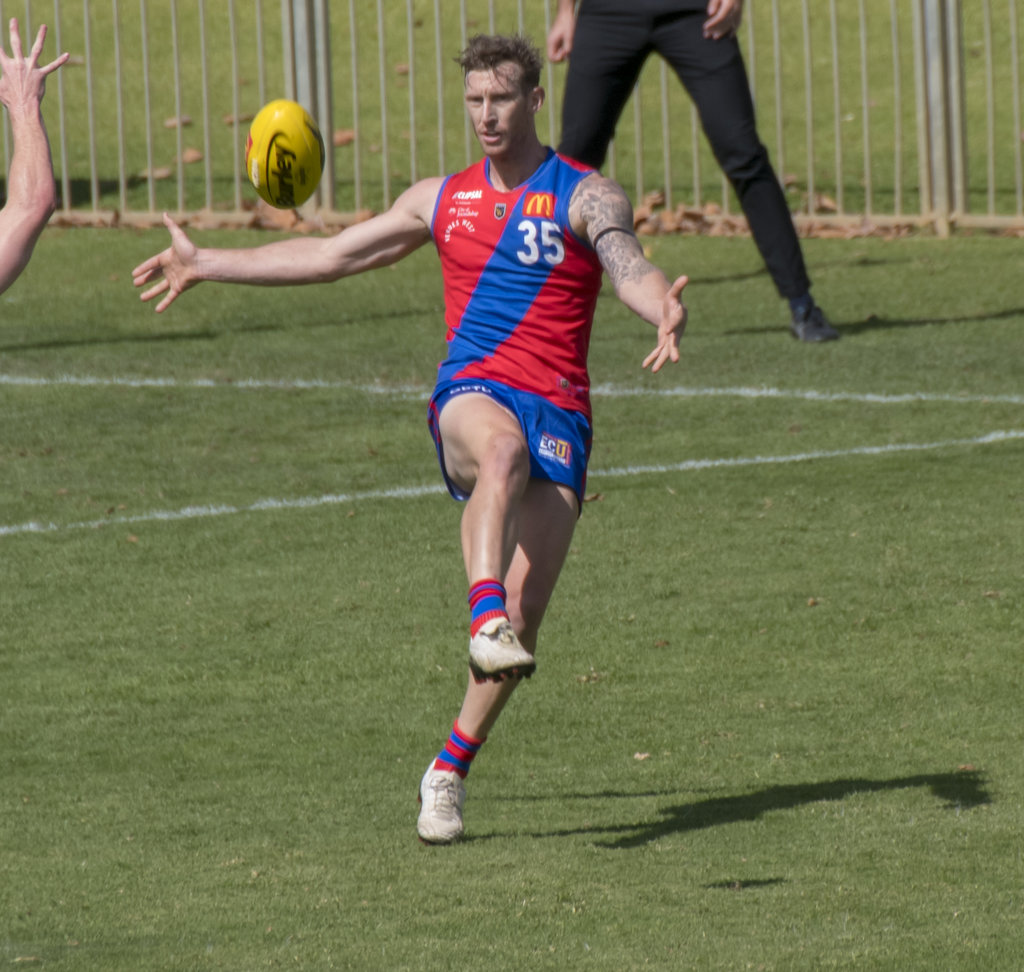 His story continues to be a remarkable one. Having played 100 reserves games prior to 2018 and just three league appearances, he showed great perseverance and is now being rewarded and is showing he is a more than capable WAFL defender. Alongside Ben King and Mark Hamilton, he helped keep East Perth's forwards in check in the WA Day Derby win while having a career-best 15 possessions along with six marks and four tackles.

BACK POCKET – HAYDN BUSHER (Claremont)
Whether playing down back and being a strong intercept mark, one-on-one defender and then creative playmaker, or spending time on the wing, he is having a tremendous season for the Tigers. Despite Saturday's loss to Peel, he was superb once more ending the afternoon at Claremont Oval with 29 possessions and eight marks.

HALF-BACK FLANK – ETHAN HUGHES (Peel Thunder)
His form continues to be solid and consistent at Peel Thunder this season and he can't do much more than to show he's ready to earn another crack at AFL level with Fremantle. Was strong across half-back again in Saturday's win against Claremont with 23 disposals and seven marks.

FULL-BACK – DYLAN WINTON (East Fremantle)
It wasn’t an easy job playing in East Fremantle's back-line in a 73-point WA Day Foundation Derby loss to South Fremantle, but he was one player that continued his good form and won his individual battle. Spent most of the afternoon opposed to Blaine Johnson and held him goalless while having 15 disposals, six marks and five tackles himself. CENTRE HALF-BACK – MARK HAMILTON (West Perth)
Another player thriving in West Perth's back-line with the increased responsibility with the departures of the likes of Nick Rodda, Joe Morrow and Scott Simpson. Was superb again in Monday's 24-point win against East Perth spending time on either Nathan Vardy or Fraser McInnes when they were forward. Ended the game with 19 possessions and eight marks.

HALF-BACK FLANK – NICK SUBAN (South Fremantle)
The 156-game veteran with Fremantle in the AFL put together a tremendous performance for South Fremantle in his first ever WA Day Foundation Derby. Split his time between playing off half-back and through the middle and put together his best performance in Bulldogs colours made up of 28 possessions, six inside 50s, five marks, five tackles and his first two goals of 2018.

WING – STEVEN PAYNE (Swan Districts)
The former veteran East Perth wingman who won a fairest and best award and took part in two Grand Finals over 109 games with the Royals was another forced out due to the alignment with West Coast, and that is proving to be to Swan Districts' advantage. Was at his hard-running best on the wing in Saturday's win against Perth with 24 possessions and nine marks. 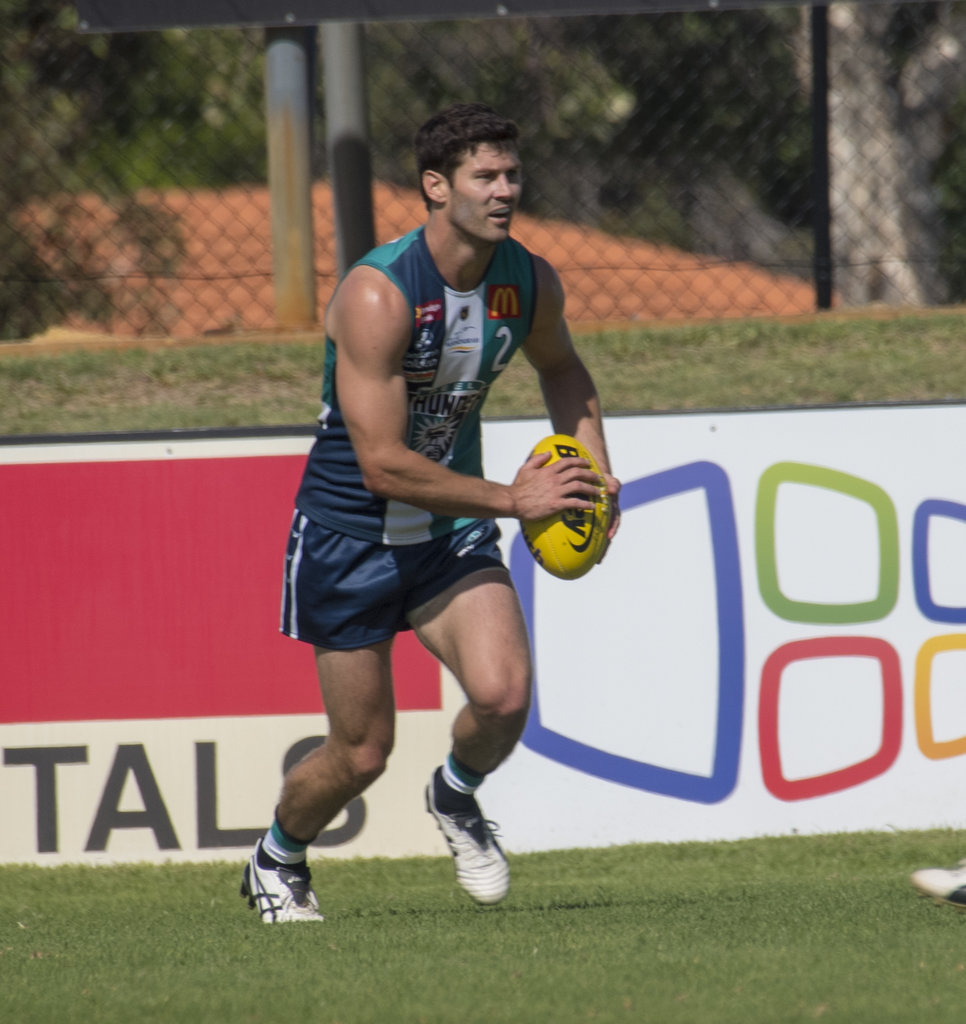 Returning to Peel Thunder following a 124-game AFL career with Essendon, he has quickly thrown himself into a role as being the heart and soul of the team as a tireless working midfielder. He's also received plenty of attention from opposition teams but he was instrumental in Saturday's win against Claremont with 20 possessions, 17 tackles and four inside-50 entries.

WING – DANYLE PEARCE (Peel Thunder)
He is a veteran of 258 AFL games at both Fremantle and Port Adelaide so he has enormous quality and experience, and while he seems to be the first player dropped at the Dockers after a disappointing team performance, he continues to give his all for Peel. Was superb again on Saturday in the win against Claremont with 30 disposals, four marks and four inside-50 entries.

HALF-FORWARD FLANK – WARRICK WILSON (Swan Districts)
The dynamic Swan Districts' half-forward might not have the consistent impact from week to week, or even during the games to take full advantage of his unbridled talent, but he is still able to have a significant impact on games when he's up and about. He certainly was in the second on Saturday as Swan Districts came from 40 points down to beat Perth by 30. He finished with 19 possessions, eight marks and two goals. 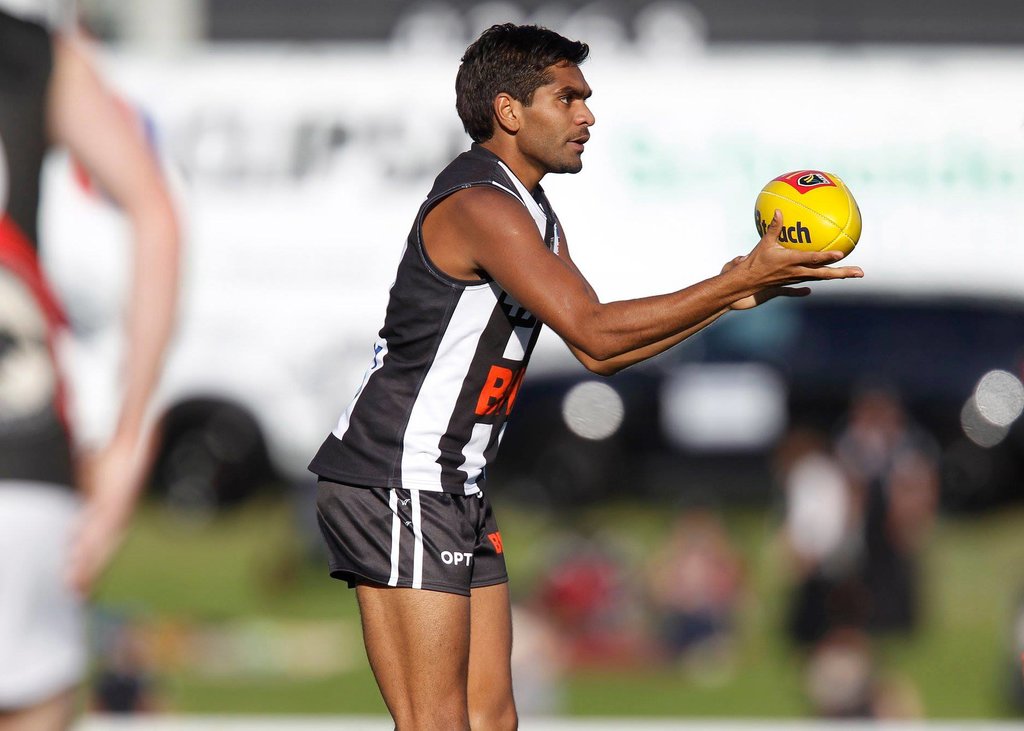 He has often been centre of attention in derbies ever since deciding to leave East Perth for West Perth and the uproar that caused. He continues to show that he's the best emerging key position player in the WAFL. Back in 2016, he showed that as a key defender and now in the last 18 months has delivered up forward and produced a match-winning performance on WA Day kicking six goals to go with 16 disposals, seven marks, four tackles and four inside-50 entries. Returned home to WA this year to join Fremantle after 101 games in the AFL at the Gold Coast Suns, and found himself demoted to Peel Thunder on Saturday against Claremont to play his first WAFL game since he lined up with South Fremantle prior to being drafted in Round 20, 2009. Responded well to likely earn an immediate recall following his three goals, 20 possessions and eight marks.

FULL-FORWARD – BRAYDEN NOBLE (Swan Districts)
Without Ricky Cary at Swan Districts in 2018, he has been called upon to be the main man to play out of the goal square while the resting ruckmen Corey Gault and Nathan Blakely play a bit higher up. He has been in solid form and already had kicked four goals back in Round 6 against South Fremantle, and he booted a career-high five goals in Saturday's win against Perth to go with 16 possessions and nine marks.

FORWARD POCKET – BRANDON DONALDSON (South Fremantle)
Having started the season in the reserves, the diminutive small forward has been delivering some remarkable performances since this season both in the forward-line and through the middle, and both with ball in hand and with the pressure he applies. Was superb in Monday's big derby win for the Bulldogs with four goals from 19 possessions and five marks. It has been a challenging last two years for the premiership winning ruckman from 2013 but without any other recognised ruckman at West Perth in 2018, he needed to stand tall and he is doing so in vintage fashion. The 195-game veteran did tremendously on Monday up against both Fraser McInnes and Nathan Vardy, finishing with 17 touches, 26 hit outs, five marks, five tackles and a goal.

RUCK ROVER – MARLION PICKETT (South Fremantle)
Having rarely played on the ball prior to this season, he has taken to the new role like a duck to water and is filling the void left with Tim Kelly's departure to Geelong in the AFL perfectly. With no Dylan Main or Shane Hockey there in the WA Day Foundation Derby, he had to step up again and did so in fine fashion with another 29 disposals, seven inside-50 entries, six tackles and four marks.

ROVER – MATT RIGGIO (Swan Districts)
The 166-game veteran who is a premiership winner and fairest and best winner with Swan Districts hasn’t quite been at his best for a lot of 2018 to date, but that changed on Saturday in the win against Perth at Steel Blue Oval. He produced some damaging football through the middle and drifting forward finishing with 21 possessions, seven marks, five tackles, four inside 50s and two goals. Perth has unearthed some exciting young talent over the past 18 months and he was another to burst onto the scene with a bang on Saturday. He made his debut and was instrumental in the Demons opening up a 40-point lead against Swan Districts shortly before half-time. He finished his first league appearance with three goals, 14 possessions, five marks and four tackles.

INTERCHANGE – WILL MAGINNESS (East Perth)
When he's at his best he is winning plenty of the ball and kicking goals, and splitting his time between playing in the forward-line and stints in the midfield. He was back to some impressive form despite East Perth losing to West Perth on WA Day, finishing with 20 disposals, five marks and three goals.

INTERCHANGE – TOM CURREN (Claremont)
He probably hasn’t quite hit the form arriving at Claremont from time in the AFL at St Kilda that the Tigers were hoping, but his effort could never be questioned . He gave his all to try and lift Claremont against Peel Thunder on Saturday and fought valiantly finishing with 21 possessions, 10 tackles and a goal.

INTERCHANGE – PATRICK McGINNITY (East Perth)
The co-captain has been in impressive form in 2018 leading the Royals both playing on the ball and then getting forward where he's always dangerous around the goals. Did all he could again on WA Day against West Perth to give his team a chance ending up with 25 possessions, six tackles and two goals. UNLUCKY BUNCH
There were plenty of players who delivered tremendous performances across the WA Day Round 9 but couldn’t quite fit into the Team of the Round, including: