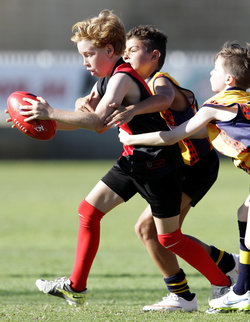 The total number includes a 27% increase on WA’s 2015 participation total, plus an additional 15,570 captured for the first time in the AFL Census under one-off club-based programs such as the Nicky Winmar Cup, Kirby Bentley Cup and remote and regional carnivals.

The overall growth has been driven by strong club participation, continued growth of female football, quality Inter School competitions and a rise in the number of Introductory School Programs.

WA football participation was the highest for any State outside Victoria and made up 20.4% of Australia’s overall total of 1,404,176, which increased nationally by 12.5%.

The number of players that joined football clubs in WA increased by 7.7% to more than 67,000 which included 5.9% growth in Youth Football and a 61.3% increase in the number of females playing club football.

The total number of female club football teams in the State almost doubled from 84 to 157 to accommodate the strong growth in female club participation.

Another important area to record solid participation growth was Junior Football, which increased by 9.3% (30,940 participants) due to improved transition of Auskick participants.  Auskick numbers also increased in WA by 5.1% to 41,709 participants.

WAFC CEO Gavin Taylor said the WAFC was undertaking a significant amount of work to continue driving participation growth and would be implementing further engagement and retention strategies, particularly in the areas of youth and female football.

“With the anticipation building towards the start of the AFL Women’s competition early next year, a significant amount of work is being undertaken on a Female Participation Strategy for Western Australia to ensure the expected increase in female participation demands are met and that clubs offer positive, welcoming environments for new participants,” he said.

“This work has included exploring the challenges and opportunities associated with female participation and setting up pathways and support structures to deliver a clear strategy that ensures WA continues to be an industry leader in this key growth area.

“Another important area of focus for the WAFC has been increasing and enhancing Youth Football participation for 13 to 17-year-olds, especially for males, where we have managed to arrest a declining participation trend with 2% growth this year.

“To see this segment grow in 2015 and 2016 is promising but we know there is still a significant amount of work to do to ensure this can be maintained and increased further,” he said.

“We must also assess the decline in AFL 9s participation numbers, with approximately 38 fewer teams taking part in this social format of the game in 2016.

“I would also like to acknowledge the role all of the clubs, volunteers and officials throughout Western Australia have played in supporting and achieving participation growth again in 2016.

“Our AFL School Ambassadors have also been instrumental in connecting and engaging new and existing participants to the game. Their promotion and delivery of football programs in schools helped achieve 58.6% growth in introductory school programs to a total of 135,891 participants.

“We will continue to engage with our schools in this critical area for making first contact with participants and exploring new initiatives to achieve higher rates of transition from schools to community clubs moving forward.” 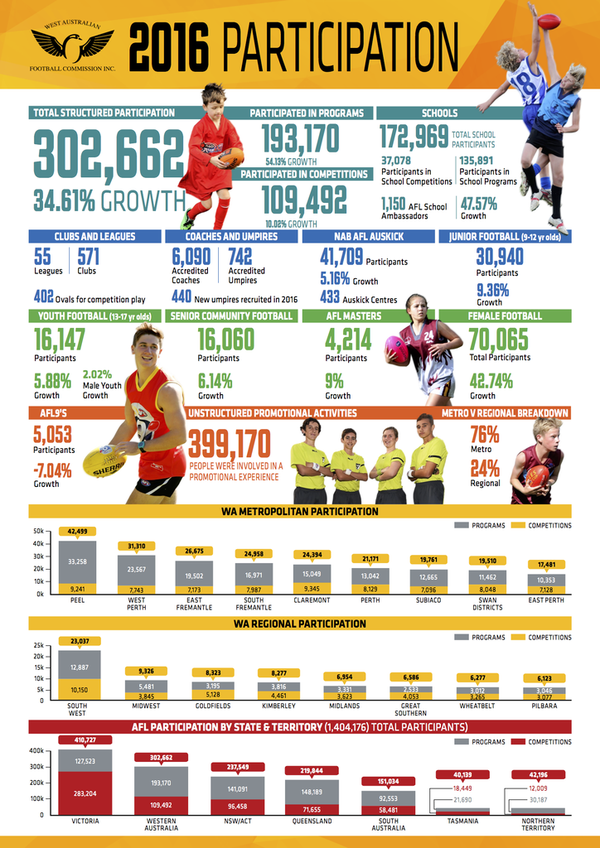